In table tennis, blocking is one of the most under-developed skills for offensive players.  If you learn to position his body correctly and contact the ball at the preferred timing, then it is also easier to learn other skills like counterlooping.  In this article, I'm going to briefly outline 9 aspects that you must consider when perfecting your block.  Check out this short list and see how you are doing... 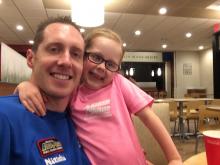 Check out a clip from one of the weekend clinics

Looping or Blocking or Both?!?

I receive hundreds of table tennis questions.  Here is a very common question that you might be asking as well...

Hi Samson.  Great clinic, thanks again.  If you don't mind, I've got one follow up question.
Since the clinic I've played 3 times so far at local clubs.  I've been focusing on attacking just about everything with loops and flips, and throwing in some punch blocks from time to time.  It's worked pretty well, and I'm winning against players who i normally lose to.

Steps to learning this modern skill!

Most table tennis players label topspin shots into several categories such as: loop, block or smash. However, modern attacking players have developed an offensive block called an active block. Active blocking is a combination between a block, loop and counter loop. It is best used off-the-bounce against a slow to medium speed loop.
Watch in this http://www.youtube.com/watch?v=kwbcgOPxx8w&feature=fvsr as Kenta effectively uses active blocking to stop his opponents’ attack and take control of the table.