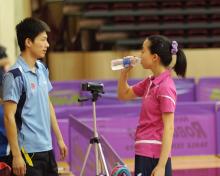 When I sit back and look at these drills, I think to myself that most of these drills are designed to improve a player’s footwork or consistency or power.  In this listing of the 400 most common drills, most of them are designed for the player to be self-focused; focused on HIS OWN game.  The problem with this is that in tournaments, you need to be more OPPONENT FOCUSED.  By focusing on beating your opponent, you can focus on pinning him in the middle or moving him out of position or placing the ball directly at his weak point.  This is the reason that I have recently re-structured the drills for my personal students here in Ohio as well as my skype students around the country.  In the final 1-2 weeks prior to an important tournament, I now have my students doing more tactical drills.  In this short article, I’m going to list several tactical drills that you can use as a template to design your own tactical drills.  There are hundred of tactical drills, but I’m just going to list 3 simple ones for starters.

Tactical Drill #2
This drill is designed to open up the wide corners so that you can move your opponent away from the table.  Player A serves short backspin.  Player B pushes long to the forehand.  Player A loops to the transition point of player B.  Player B must move to his right to play a backhand block (leaving the backhand court open) OR player B must move to his left to play a forehand block (leaving the forehand court open).  As soon as player B moves for the transition ball, player A loops the next ball to the wide corner.  After that shot, the rest of the drill is free point – either player can play any shot to any location.

Tactical Drill #3
This serve return drill is designed to help you place the ball in a difficult location for your opponent.  As always, your primary focus should be to watch the incoming ball.  Out of your peripheral vision, you should be able to see your opponent while watching the ball primarily.  Player A serves short no-spin with his forehand from the backhand side.  Player B places the return based on the position of player A.  If player A stays near the table in a forehand pendulum serving position, then player B will flip the ball deep to the backhand to jam him.  If player A pivots around the backhand corner, then player B will flip the ball deep to the open forehand side of the table.  If player A stays exactly in the middle of the table covering the corners, then player B will flip to the middle transition point.  At first, player A should be quite obvious so that player B can easily see where to flip.  After some practice, player B should be able to pick up on subtle clues that you be very useful in identifying the idea placement.