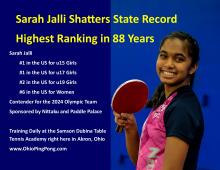 Table Tennis athlete Sarah Jalli has been working night and day to improve her table tennis skills and prepare for the 2024 Olympics.  Last weekend, at the Samson Dubina Table Tennis Academy, she racked up 28 wins in a national-level tournament to boost her ranking beyond any Ohio 15-year-old since USA Table Tennis began in 1933.  In the last 88 years of the sport’s history, there has never been a player (boy or girl) in the Ohio 15-and-under division to be over 2400.  This is a great ranking for this young, developing player!  In addition to her ranking points, she earned $1500 prize money and was crowned u15 and u18 champion last weekend at the tournament!

So what allows this Jackson High School Freshman to improve beyond what all other 15-year-olds have done during the last 88 years in table tennis?  Great question!  She is dedicated to making small daily improvements in her game, she listens to her coaches and diligently tries to apply all the details she is learning, she has great parents who daily support her, and she has great equipment sponsors – Nittaku and Paddle Palace who supply her with world class equipment.  Determined to making long-term progress, Sarah Jalli is right on track to making the 2024 Olympics.

With her USATT Ranking point of 2467, this makes her:

So what’s next for Sarah Jalli?  She is back to the table training every day this week here in Akron, Ohio at the Samson Dubina Table Tennis Academy with some of the nation’s best players.  She is preparing for the $10,000 in invitational tournament this weekend.  If you want to come cheer her on and support her, make sure that you stop by this Friday and Saturday.  FREE spectator admission.