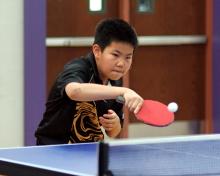 Tournament Article From Our Last Event Here in Akron


Eighty-one players from 7 different states competed in the Newgy September Giant Round Robin played on 12 tables with excellent conditions, free meals, and over $2000 in cash and prizes.
Friday night featured warmup-events:  Handicap RR and Draw Doubles RR.  In the handicap event, players were divided into two large groups based on their ratings.  The top 2 players advanced from each group without crossovers against the other groups.  The cash winners were Jeff Pitrof 1st and Lee Szwast 2nd with Blake Cottrell and Richard Bennett making the semifinals.
The next Friday event was the draw doubles; this was the first time that any tournament in Ohio has ever had a draw doubles event.  The lower players all drew names from the hat to be paired with a higher player.  Every team got 6 matches, which gave an excellent warmup for Saturday’s event to prepare for the USATT sanctioned events.  The giant round robin finished around 8:30pm with Lee Szwast and Samson Dubina taking first place cash and Blake Cottrell and Sam Dubina taking the finalist prize money.
The Saturday events featured giant round robin groups of 8 players with the winners advancing to crossovers against the other groups.  Saturday morning started with the Open RR and the U1600 RR.  In group 1 of the Open, Jack Allen pulled off a 300-point upset over Amir Hamrahian.  Other upsets included Sihai Chen over Alan Wu, Will Lombard over Ali Khatami, and Shreyans Bafna over Keiran Pinili.  The Open semi-finals were both 4-0 Kenneth Pinili over Don Hamilton and Samson Dubina over John Allen.  At the start of the open final, Samson controlled game with a 11-7 win.  For the next 2 games, Kenneth played very aggressively with powerful counterattacks from both sides winning game 11-7 and nearly winning game 3.  After game 3, his consistency lower and Samson took the match 11-5, 11-2.
The u1600 RR was also played on Saturday morning with Binghamton’s Emir Alic coming out on top of local hardbatter Joe Sabella in a 13-11 in the fifth final.  Tuyen “Harry” Tran and Fuming Wu were awarded as semifinalists.
The u2000 and u1200 events were in the afternoon.  The u2000 event featured 4 groups of 8 players.  Four players from each group advanced to the final 16 elimination.  In the semifinals, a fiery Ved Dookhun ran away with an 11-0 win over Shreyans Bafna, only to lose the next 3 games.  In the other semifinal, lobbing and counterlooping ITTF Trickshot competitor Sidd Khandelwal won the first 2 games from Roger Liu before losing 3 consecutive deuce games.  Both local juniors were determined to win, but the 15-year-old Shreyans took home the $200 check with 12-year-old Roger taking home $100.
The u1200 event consisted of many young tournament players.  Local Junior Kris Williams won first over rapidly-improving Jon Byler with pips players Richard Beer and Brent Butler taking the semifinal prizes.
We really appreciate the support of local players as well as the players who traveled from Michigan, Illinois, Kentucky, West Virginia, Pennsylvania, and New York.
I would also like to thank...
Our sponsors:  Newgy, Nittaku, Paddle Palace, and House of the Lord
Our tournament officials: Greg Thompson, Perry Wilson, and Pierce Scott
Our scorekeepers: Joe Ciarrochi, Dawn Ciarrochi, Heather Dubina, and Annie Liu
Our photographer: Chris Jordan
Our Chefs: Rachel Detwiler and Heather Dubina
Our Volunteers: Sam Dubina, Nancy Dubina, Cathy Steele, and Dan Detwiler
and Pastor Jimmy Taylor for allowing us to use his equipment and excellent facility.  Our next tournament is scheduled for March 2014.  The entry is now available at www.samsondubina.com