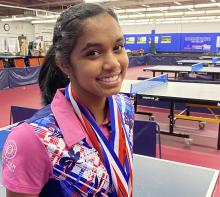 The Best in North and South America

The Best in North and South America

From appearance, you would think that Sarah Jalli is just an average kid at Jackson High School – she studies hard, gets good grades, lives in the community, goes to the gym, hangs out with friends, goes to church, and has a supportive family.

However, Sarah has one very special skill.

She is the US National Champion in TABLE TENNIS, aka ping pong!

In July 2021, she was crowed as the US National Champion in the both the under 15 year old division and under 17 year old division!  Based on her amazing performances, USA Table Tennis sent her to represent the United States at the Pan American Youth Championships in Santo Domingo, Dominican Republic!  This was her first international tournament, and she rose to the occasion cruising through the early rounds, dominating in the main draw, and clinching the u15 girls title with winning every match 3-0 or 3-1!

Not only did she capture the singles title, but she also teamed up with other US Superstars to win the girls doubles and girls team events!

We are so proud of Sarah for becoming the best player in North and South American and for winning three international titles!  We want to encourage and support her as she continues to train daily at the Samson Dubina Table Tennis Academy and moves forward to new competitions ahead including the Pan Am Adults Championships in Salt Lake City; Pan Am Junior Games in Columbia; US Open in Las Vegas, 2022 World Championships in China, and 2024 Olympics in Paris!

Sarah would like to thank her dedicated parents for their daily support as well as her faithful sponsors – Nittaku, Paddle Palace, and Power Pong, and she would also like to thank her friends and teachers at Jackson High School who daily give her encouragement to succeed!  This is a team effort and she is truly thankful for a community that stands behind her!  Last, she would like to thank God for giving her life and salvation, the ability to play, and the ability to play for His honor and glory.