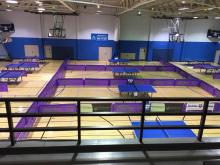 What are they saying...

Are you considering attending our Training Camp?  I sure hope so!  See what the students and coaches are saying....

“Samson Dubina is one of the best educated and most effective coaches working today in the USA.  If you are looking for a great camp experience, I highly recommend attending any camp that Samson is conducting.”    - Richard McAfee,  (ITTF Course Conductor and Trainer.  USATT Hall of Fame Inductee)

"I have been a professional player for 12 years and traveled throughout Europe.  I have never seen a training camp as organized as Samson's Summer Camps."   -Robert Eriksson (Swedish Men's Singles Bronze Medalist)

"Samson is one of the most experienced, technically advanced, enthusiastic, and organized coaches around. I worked with him at a USATT Supercamp, and we had a great time and the players learned a lot!"  –Larry Hodges, USATT Hall of Famer and Chair of the USATT Coaching Committee

After I started getting coaching from Mr. Samson Dubina, my overall game has improved very significantly.  My footwork, strokes, strategy and mental toughness during the game have improved significantly because of his advice, coaching and guidance. Because of his coaching, I won a National title in Las Vegas.     -Denethi Wejegunawardana (Regional College Champion).

“Samson integrates sport science and technology very effectively by taking advantage of new and innovative resources to reach students nationwide. His understanding of the science behind the sport in addition to his multi-angle cameras help his students visualize and personally see what is going on."    -Angela Guan (North American Junior Champion)

"Samson gave me a better understanding of the game by helping me to understand what went right or wrong during the point."    -Burak Cevik (Satisfied Customer)

"I had been watching videos of professionals on YouTube as well videoing myself to improve my game and found both practices helpful. But having a professional assess your movement and swings came across to me as a key factor in improving--because there were certain things I was simply blind to. For example, Samson noticed that the positioning of my elbow on my backhand was not optimal for generating power. He also noticed I wasn't bending down or leaning forward enough on certain shots. Also, we spent a good deal of time ironing out the various aspects of proper footwork, understanding where the feet need to be and when, etc., on service, in between shots; and on the correct way to move from side to side and forward to back. He also discussed strategy--how to optimize strokes in various game situations, how to prepare and react to your opponents strokes, what to expect from your opponent based on the stroke you make, and how to assess your opponents game early on so that you can hit the ball to places that will be most difficult for him or her. He also explained how to use the practice sessions to mimic game type situations so that one does not merely become good at practice but then lost in a real game. After each lesson Samson emailed me a summary of things I needed to keep in mind and work on based on that particular lesson. He gave me plenty of time to ask questions and he was patient with me, like for example on the aspects of the game I was struggling with. This was an amazingly helpful experience for me."    -John VanCott (Satisfied Customer)