Pong Talk with the Stars

I owe this blog to Samson Dubina! It's interesting how sometimes one thing leads to another ... Someone recently asked me how I started writing this blog so here it is.

I went to my first U.S. Open in July of 2014 and was having a hard time adjusting to the playing conditions in Vegas. I happened to see Samson stretching before a match so I took the opportunity to ask him two questions. I had read many of Samson's articles before that and had a feeling that he would be able to help me. It was no surprise that I greatly benefited from Samson's advice, and then it dawned on me that many ping pong enthusiasts would be interested in hearing from the best in the sport. So I published my first interviews with Bojan Tokic (who had visited my home club a week before) and Samson Dubina. And thus, Pong Talk with the Stars was born!

So now you must be wondering why I'm doing Samson's interview a second time. Like I said before, talking to Samson was an impromptu idea. I wasn't really prepared for the interview and only asked him two questions to which Samson gave fantastic answers. Fast forward a year and a half ... About two weeks ago, I met Samson at a tournament at Princeton Pong (NJ) while he was touring as part of his Olympic training and that's when I decided to revisit the interview.

I hope you enjoy getting to know Samson Dubina! 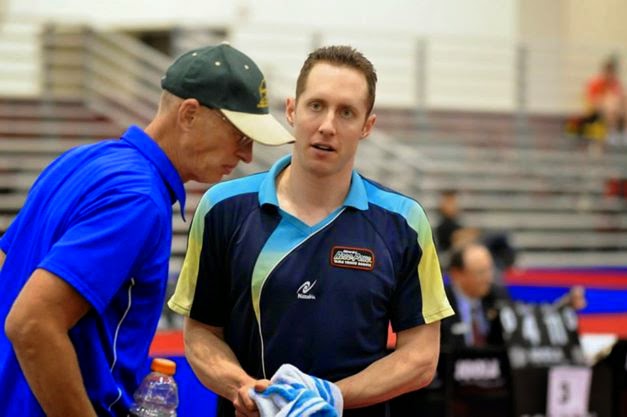 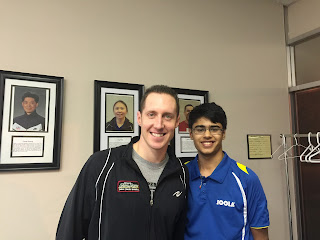 1. Samson, many of us have read about your training for the Olympic trials. Congratulations on your recent improvement! I'm sure lots and lots of hours of deliberate practice have gone into this. Are you satisfied with the results? What are you currently working on? And, what's next?
The Olympic trials are just over one month away. I have made good progress and I still have plenty of work to do. For about nine years, I was stuck around 2400. Now I feel that I have made significant improvements in my game and I'm playing around 2550 level. But when I said that "I" have made progress, I should have actually said that "we" have made progress. This progress has been with the support of many sponsors and many players around the country who believe in me and believe that I can get to the next level and truly be a contender for the Olympic Team. Together "we" can do it.

2. Your fundraising efforts brings to attention the challenges of pursuing a professional table tennis in the U.S. Do you have any suggestions on what the table tennis community can do collectively to remedy this situation?
Living in Ohio makes it very challenging to get world-class training on a low budget. However, for the players living on the east coast or west coast, many of them do have access to professional training. As more training centers open in each area of the country, it will easier for players in Ohio and other states to reach an elite level. For those players who need funding, I highly suggest starting a GoFundMe page and raising money.  Check out my page here:
https://www.gofundme.com/SamsonDubina

3. Tell us about how you got started with table tennis.
When I was 12 years old, I received a flier in the mail from a local church offering free table tennis lessons. Coach Terri Weaver was there and introduced me to the sport. I then started going to the Canton Table Tennis Club.

6. I know you also coach. Tell us about your coaching career.
For the last eight years, I have been doing private lessons at my house and doing group lessons at the club near my house. In February 2016, we plan to expand to a larger facility to improve our clinics, tournaments, and leagues. We are also developing a full line of innovative table tennis products that will be released in 2017-2018. More information will soon be available on my website www.samsondubina.com

7. What do you enjoy more - coaching or playing?
I enjoy playing more. However, I also enjoy coaching students who are very motivated and really try to apply what they are learning.

9. If you could go back in time and get a "do-over" for any one match from any tournament that you have ever played, which one would that be? Why?
In the finals of the Men's Singles at the 2009 US National Championships, I was leading 3-1 on Michael Landers and lost the match 11-9 in the 7th. Tactically, I didn't play very smart that match and there were many adjustments that I should have made.

Most under-utilized, yet effective serve? Low, fast, double-bouncing, half-long serve
Most ignored, yet important practice drill? Serve return
Most under-developed footwork drill? Multi-location footwork where both players are moving throughout the drill
Mistake made most often during tournaments? Hesitation on serve return
Any other comments? Many players have one particular mindset for practice and a different mindset for tournaments. The same mindset should apply for warm-up, practice, drills, games, and tournaments.

11. Many players record their tournament games. What's the best way to learn from these recordings?
There are two basic ways to do it. The first way is to analyze your opponent with a scouting report looking for strengths, weaknesses, tendencies, and game patterns in your rival. The second way is to analyze your own game examining your technique in slow motion or examining your decision making and shot selection skills.

12. You're going to have to tap into your creative side for this one. Based on your recent personal experiences, if you had to write a recipe to make a "2500 table tennis player," what would it read?
If you are 6-12 years old, then come to the Samson Dubina Table Tennis Academy for seven years. If you work hard, I can take you to the 2500 level :) Ok, so here is what I would do for you...

#1 Getting the basics right. Hiring a professional coach within the first few years is critical. To really improve my student's basic strokes, I now have an instant video playback system. With multiple HD cameras, we can instantly play back the previous point in normal speed or slow motion in split screen or full screen on a 50" smart TV. This has really helped improved the basic strokes of my students.  After the first few years, it is difficult (nearly impossible) to change some bad habits.

#3 Work Hard. Everyone wants to win, but not everyone is willing to work hard enough to win.

#4 Set Goals. You have heard the expression, "If you don't know where you are going, any road will get you there." First set the goal, then lay out a roadmap as to how to reach those goals.

#5 Play Tournaments. The most successful players in the U.S. are typically the ones who forget about rating and are willing to go out and play regular tournaments. Playing tournaments enables these particular players to overcome pressure, develop the ability to play against a variety of styles, and learn new things from others.

13. Who is your favorite international table tennis player? Why?
Chuang Chih-Yuan. I like the fact that Chuang has overcome many obstacles in his game to reach a world-class level. I also admire his daily training routine and dedication.

14. What do you like to do when you are not playing or coaching table tennis?
I like to spend time with my wife Heather and my kids Fiona (age 5), Kenzie (age 3), Titus (age 1.5), and Phoebe (age 3 months). Other hobbies include chess, water skiing, and volleyball.

15. Anything else that you would like to add?
I would like to publicly thank my sponsors who believe in me and believe that I really can reach a high level in competing as an athlete and promoting the sport. Thanks to Newgy Robo-Pong, Paddle Palace, Nittaku, Bridgestone, Wil-Cut, and Clear Choice.

For those of you who missed the first interview with Samson, here is a link to it. Enjoy!  http://pongtalk.blogspot.com/


Samson, thanks so much for you time. I wish you the very best for the upcoming Olympic trials. I am sure that your hardwork and commitment will pay off!