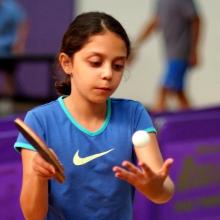 Read the Article and Watch the Video to Learn the Details of Serve Return!

One of the most commonly asked questions in table tennis is…  “How can I best return no-spin serves?”  No-spin serves appear to be very easy but can be very difficult to return.

At the professional level, spin is more often used to give control than it is used to “trick” the opponent.  By spinning back a no-spin ball, you will have control.  There are 2 pitfalls that you must avoid when looping no-spin serves.

#1 The first pitfall to avoid is blocking the no-spin serve.  Many players stand too close to the table when receiving fast serves.  When the fast no-spin serve hits deep near the end-line, these players mistakenly block the ball off-the-bounce and into the net.  The same mistake can be applied to the short no-spin serve.  Without any energy on the serve, if the receiver merely touches the ball, it will pop up or fall off the racket into the net.  Remember…  Without creating spin, you will have absolutely no control to properly receive a no-spin serve.

When looping a long, no-spin serve, let the ball come to the top of the bounce.  Instead of jumping forward to receive, allow the serve to come back to you.  Start your racket slightly lower than the top of the bounce and brush the ball forward and slightly up.  Try to place your loop to the wide forehand, wide backhand, or elbow (transition point).  Because your loop won’t be incredibly strong against this serve, do your absolute best to avoid playing to the power zones of your opponent.

When flipping a no-spin serve, let the ball come to the top of the bounce.  By allowing the ball to rise, you will have more time to adjust your positioning, you won’t need to lift as much, and you can have a more direct-line-shot to your target.  You should usually flip to your opponent’s backhand or middle.  A surprise flip to the backhand or middle will usually be met with a block from your opponent; this block is ideal for you to return with a strong attack.  If you feel that your opponent is stepping around the backhand side to hit a forehand, then a surprise flip to the forehand is also very effective.

Regardless of which receive you choose to use (loop, push, or flip) it is essential to put spin on the ball giving your control.  Try to attack no-spin serves with about 40-70% power while giving good spin, keeping it low, and varying the placement.

Here is a short video of serve return against no-spin serves:  https://www.youtube.com/watch?v=oCVQWQbjE5s